We were lucky to get in at the launch dinner of Ronnie Saunders Diners Union, as they have been completely sold out since they opened. In this temporary pop up freshly opened in Shoreditch, you’ll be able to tuck in fantastic food without struggling with your conscience. Or banker for that matter! At £15 for a 5-meal course, it is definitely more about the bang than your buck, and their mission is pretty simple – everyone pays the same and everyone gets the same (and they are kind to vegetarians too).

Until the end of the year, Michelin-trained chefs prepare fantastic food for all each Friday and Saturday evenings with only organic vegetables, meat, or fish. The menu changes weekly and is inspired by very casual themes such as the “French Revolution” or “Italy 827AD” (next weekend). What’s next, chef? 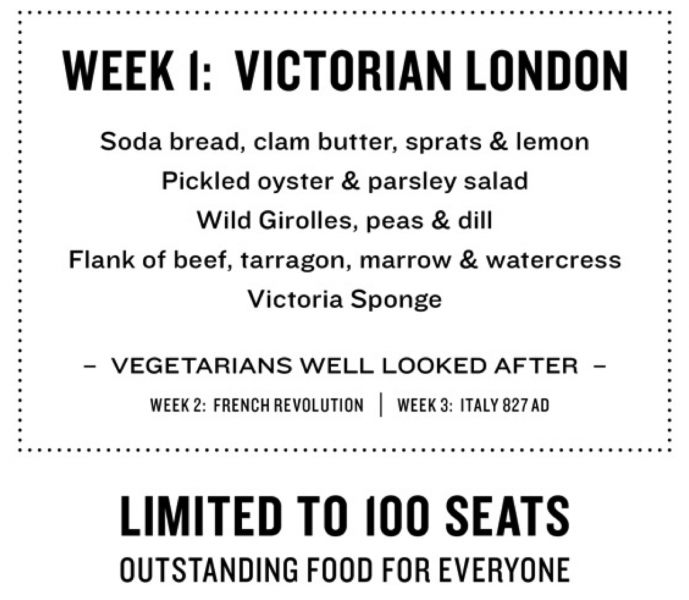 The place is run by our buddies Cameron Worth and head chef Rolan Dack. Rolan trained in the kitchens of Corrigan & Pierre White, but decided to leave the fine dining world in favour (and flavour!) of the real world.
In case you wonder, Ronnie Saunders was Rolan’s granddad. A man’s man, a ladies man, and a proper London character, Ronnie’s spirit lives through as one of the inspirational forces behind the project which has deep social roots. Good food brings people together, so even more than their passion for food, the Diners Union is rooted in love for people (hence their “food for all” motto).

As part of their mission, they partnered with the St Mungo’s charity to help homeless Londoners to get proper kitchen training, teach them how to run a business, and with the hope to help them launch their own pop-up restaurant. Read more about them in these interviews on London Life or Hot-diners.

“Soda bread, clam butter, sprats and lemon.” Excellent homemade bread with a nice, tasty and fluffy butter, the fish was very good and simply charred on the spot.

“Pickled oyster and parsley salad.” The oyster was amazing, really fresh and good!! On the side were some bits of pickled fennel and radish infused with lemon. Such a refreshing idea!

“Wild girolles, peas and dill.” A very successful combo, boiled peas and samphire, with fresh girolles cooked simply in oil and wine, with loads of dill on top. Man, I really love dill…

“Flank of beef, tarragon, marrow and watercress.” The meat was cooked to perfection, very smooth in texture, and very subtle hints of tarragon.

“Victoria sponge.” Finally the desert was pretty nice, not very sweet and a bit crumbly, a very simple combination.

That first night has been a very interesting – almost surreal – experience, a break in the usual Londonian rhythm where everyone could park their differences aside for a minute. That parking lot became for a night a hub for people to relax a bit and get closer thorough food, regardless of who they are. This effect was further accentuated by the big communal tables that created a circus canteen casual atmosphere to the party.

It will be around until the end of the year – at least – so you still have enough time to book your spot. And absolutely show them some love and follow them on Facebook and Twitter.